It is the mission of the Bay Lakes Knitting Guild to give knitters of all skill levels the opportunity to get to know other knitters, to learn new techniques, and to share their ideas, resources, and talents with the community.

Hey knitters!  Our upcoming April program is how to knit a jogless striped hat.  Learn how to have your colors join without that annoying jog.  I know this is a bit late but you have time before next Thursday's Zoom meeting to get ready.

All you have to do it find or dig out your favorite plain old hat pattern.  I found a few (dozen) free ones on Ravelry and just picked this one or maybe this one, but there are lots of them.  Grab a couple colors of yarn, plain colors will work best for this first effort, cast on and knit the ribbing and then a bit of hat body so you're ready to knit the first stripe on Thursday night.  I plan to knit the smallest size.

Glenyss from the Grafton Yarn Store will be there to teach us and she's excellent at explaining things. 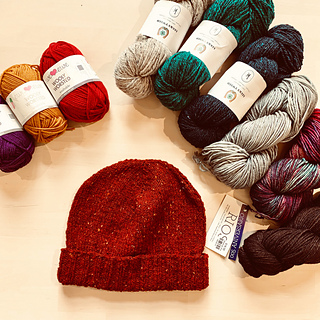 So gather up your supplies, do a little homework, and come learn how to make jogless stripes with us on Thursday, April 15.  I look forward to seeing you!

Posted by Barbara at 8:09 PM No comments: 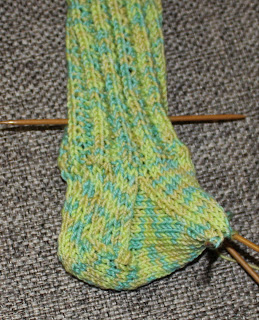 The next BLKG meeting is on March 18 and the program is the second half of Knitting Socks Two-at-a-Time.  Linette asked that we be to the gusset before the meeting, if possible.  If you can't manage it or the instructions seem like Greek she'll be happy to guide you through.

I confess that I'm knitting one sock on DPNs.  I just can't wrap my mind around the two-at-a-time thing and fear the yarn getting all tangled.  Maybe when I see the cool socks you all have made I'll regret my decision but then I'll have the whole bunch of you to help me.

Hope to see you all on Zoom on March 18 at 6pm!  Watch for the link email!

Posted by Barbara at 5:05 PM No comments: 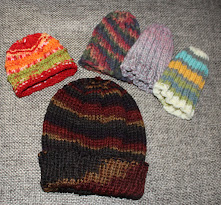 The theme of this month's BLKG Zoom meeting is charity knitting.  So grab some yarn and maybe the pattern in last month's newsletter for a toe cover for casts and get knitting.  Knit a preemie hat!  You don't have to make a  shawl or a baby blanket, small things count too. 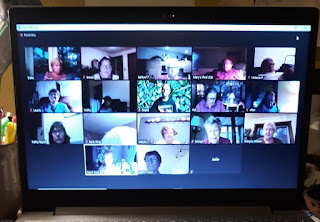 There was a pretty good turnout at the first BLKG Zoom meeting on October 15th.  Glenyss from the Grafton Yarn Shop came and presented the first half of her "Which Sweater Should I Make For Me?" class.  We learned about body shape, texture and pattern, and color consideration.

I'd like to say that I have an Hourglass shape because I do have a waist but I think I'm more Round.  *sigh*

She talked about choosing a pattern that calls attention to the parts of you that you like and how to choose a sweater that will fool the eye and downplay your negatives, like a patterned yoke to make up for a small top or a cropped sweater to draw the eye away from your hips.

Remember getting your colors done in the 1980s?  She talked about choosing a color that will flatter you and make the most of your skin tone, eyes, and hair.

Now comes the homework.  For this month's meeting she asked that we search pattern books or Ravelry for patterns that we think will flatter our body shape.  I've found three cardigan patterns, well, two really because the third one is a shrug cardigan with three big buttons down the front, which with my "front", I suspect wouldn't look good.  Maybe I'd put on just one button...  Or maybe that pattern is my "Don't."  Next I'll search for the right colors.

Join us on November 19 to see what people find.  I'm not ready to start a sweater just now but doing this will make sure I have the right sweater and color when I'm ready to cast on.

You come and play along too.

Posted by Barbara at 3:49 PM No comments:

Sorry for the extended silence but we've been working out how to keep being a Guild in these days of social distancing and coronavirus.

Like so many of you we've started using Zoom for meetings.  It isn't perfect but it's better than not meeting.

Tomorrow is our regular meeting evening and Glenyss from the Grafton Yarn Shop will be presenting a program teaching us how to figure out what sweater pattern is right for our body type and coloring.  She says that the most popular sweater pattern isn't right for all of us so she'll teach us how to make better choices.  I can't wait. 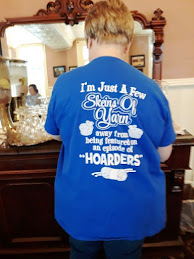 For the next four weeks we're going to be having one social knit night each week with a different Board member hosting.  Carol will send all members a Zoom invite to the social knit nights so be sure to join us for a little knit and chat.

In today's Green Bay Press-Gazette there's a long article about a college professor who's teaching mathematical knitting at Carthage College's January short-term.  If you've ever made a knitted tube (sock? mitten? hat?), you've used math.  When you change a pattern's size or the yarn, you use math.  Have a read, it's a very cool class.

KENOSHA – Few people look at a ball of yarn and a pair of knitting needles and think, well, here’s a math problem waiting to be solved.
Sara Jensen does.
Before she was a mathematician, before she earned a doctorate in abstract algebra at the University of Wisconsin-Madison, before she began teaching math at Carthage College in Kenosha, Jensen was a little girl learning to knit from her grandmother.
Like many who learned the craft from an older family member, Jensen knitted for a while, then stopped before taking up the hobby again as an adult.
But Jensen is also a math teacher and a couple of years ago she thought it would be cool to use knitting to teach math.
Though mathematicians and math teachers may have a reputation of being dry, dull and boring, Jensen is trying to make math interesting in an unconventional way.
No calculators, no equations on chalkboards, no textbooks. Just plenty of yarn and knitting needles.
“This class is a way for math to be creative,” Jensen said. “I think there’s room for creativity and discovering things in mathematics.”
There was no shortage of students signing up for Jensen’s mathematical knitting course. The class meets 9 a.m. to noon Monday through Friday and ends Jan. 30. It’s part of Carthage College’s J-term — daily courses taught for a few weeks each January between the fall and spring semesters.
Of the 24 students, one is a very strong knitter, about a half-dozen had learned from moms or grandmas and the rest knew nothing about knitting.
So Jensen started by teaching students how to hand-knit — knitting simple things with fingers — to make Celtic knots for potholders. Then students picked up needles and gradually made more difficult items.
On a recent morning, Jensen talked about shapes and how surfaces can look different depending on the viewpoint — like how the Earth seems flat to someone walking along a sidewalk but is actually a sphere when viewed farther away.
“In math, how many shapes are there that look flat but if you zoomed out, it would look different? So we’re knitting something that’s a sphere or a doughnut or a cylinder,” Jensen said.
Students gathered into five teams, with each team given a specific number of colors and a shape to knit: Möbius strip, cylinder, sphere, square and doughnut, known as a torus to mathematicians.      Before grabbing rolls of yarn and needles from a large box at the front of the classroom, students sketched out the problem on graph paper.
The team making a Möbius strip with six colors of yarn began by cutting a piece of paper in the desired shape and using markers to figure the color combination. Sam Bednarz, a sophomore from Gurnee, Illinois, and her team members decided to hand-knit strands, rather than using needles, before combining them into a one-sided surface known as a Möbius strip.
Bednarz signed up for the class because she needs a math credit. Plus it sounded fun.
“I thought it was neat to take math concepts and apply them to knitting,” said Bednarz, who admitted some of her friends and family thought she was nuts. “I’ve gotten a few crazy responses. ‘That’s a course?’ ‘This is what we’re spending our money on?’ ” Michael McMurray, a freshman Japanese and English major from Menomonee Falls, wanted a class that’s the equivalent of geometry in 3D.
“I’ve always struggled with math and I wanted a math-friendly course, something that wouldn’t intimidate me,” McMurray said. “This is taking geometry from a school subject into the real world.”
Like many mathematicians, Jensen gets this a lot: When people learn her profession, their first response is usually, “Oh, I hate math.” But when Jensen asks why, they usually say they hate computations and formulas.
Jensen can relate.
“I don’t like computations and formulas either. I don’t think of those as math. Mathematicians will say we’re problem solvers,” said Jensen, a New Berlin native who earned her bachelor’s in math at Carthage. “Much of what I’m trying to get across to my students is that the heart of mathematics is figuring out why something works.”
This is the second time Jensen has taught the class. To create her syllabus, she sought the advice of authors of mathematical crafts books. She uses patterns found online and also devises her own. The last thing she knitted was a purple and white hat with a fall leaf pattern she found online for her 7-yearold daughter, a “Frozen” fan.
Sean Johnson took linear algebra last semester and will study computer science in the spring. But this week the 6foot-10 center for Carthage’s basketball team was busy knitting a square with four colors of yarn.
“I’m a math major so I like math, obviously. I took this class purely for the fun of it and to learn how to knit, to learn a life skill,” said Johnson.
By the end of the class, students have knitted a potholder with a pattern of either a triangle or square, headband, phone case, coffee mug cozy and a baby hat. For their final project, students are free to choose from ideas provided by Jensen or create their own.
Two years ago, in Jensen’s first mathematical knitting class, someone knitted a Rubik’s Cube for their final project.
“And it worked!” Jensen said.
Posted by Barbara at 3:08 PM No comments:

Due to a miscommunication, the Program Info in the December newsletter was incorrect.  Sorry about that. 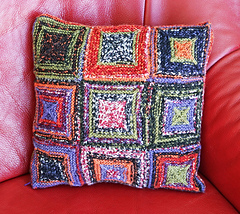 At tomorrow night's December meeting, we will all bring a dish to pass and the Secret Santa projects will be exchanged.  We will also kick off the Ambiente Modular Pillow (free from Skacel) KAL project so bring your yarn, needles, and pattern to get started.

At January's meeting representatives of a few of the charities we knit for will be there to tell us about their work in the community.  We will also have information so we can prepare for the steeking program presentation in April.  Yikes!  I don't know if I'm ready to cut into my knitting but I'm willing to watch and learn.
Posted by Barbara at 8:27 AM No comments: 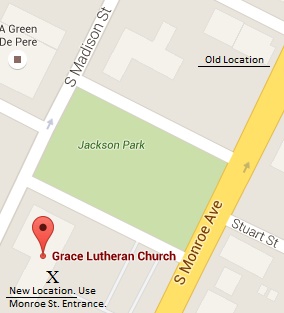 Bay Lakes Knitting Guild meets the Third Thursday of the month on Zoom from 6:00-8:30 pm.

If the Green Bay Public Schools are closed for a snow day on our meeting day (3rd Thursday of the month), the Bay Lakes Knitting Guild will not meet.